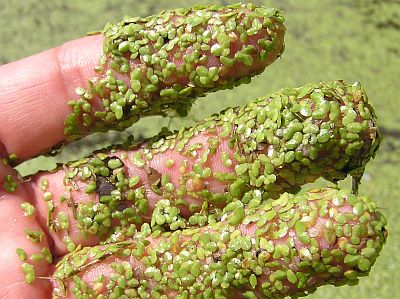 Really the title of this article says it all.  In the heat of summer, plant life in a pond will grow abundantly.  This can be good or bad, but in the case of duckweed, I have to admit that most people don’t really like it in their big ponds.

I’m not insinuating that every single pond owner will want an absolute, pristine, perfectly clear pond where they can see every fish and all the way to the bottom, peering through water that is almost as clear as glass.  No, I’m not suggesting everyone is like this, but in truth, most of us want to see a little bit of the water now and then.

And Duckweed doesn’t always make this easy to do.

It’s a fast growing, nutrient gulping little pod of a plant that will bloom out and cover a big ole pond in a hurry when conditions are right.

And when that happens people (maybe you) have an urge to kill it.

But hold off on pulling the trigger on this plan until after we’ve talked about if first, OK?

Let me share a most optimistic view of common duckweed that perhaps you haven’t heard before.  It’s not the worst thing to inhabit your pond, because duckweed is actually a very good water filter or cleaner.  Indeed, it’s actually helping to clean up any pond it’s found in.

Believe it or not, there are small pond owners that actually add it to their ponds to help with the health, clarity, and water quality.  Problem is, most large pond folk don’t like the look of it necessarily.

But like all aquatic plants that are free-floating in the water, duckweed thrives on the nutrients released by things like organic muck at the bottom of a pond, or run-off from fertilized ground around it.  By keeping these nutrients managed somewhat, other plants like algae are less likely to bloom out, and that’s probably a good thing.

But let’s say you still don’t buy into this idea that a bit of duckweed is good to have around.  Or maybe your just tired of your pond being green.  What do you do then?

And the best answer I came up with is, it depends.

Treat Duckweed Early Or Not At All

If it’s summer time and it’s hot and steamy outside, and the plant is basically covering the pond or most of it, I wouldn’t do anything.  That’s right, nada, nothing at all.  And here’s why.

Most treatments for duckweed including those with fluridone in them like Sonar or Whitecap, really work best early in the season, or early in the life cycle of the plant.  In case you haven’t shopped around for these treatments yet, let me forewarn you, they ain’t cheap.  They’re priced close to gold actually.  So if you use them, I’d advise using them as directed and not wasting your money if you can’t do that…and the makers of said products suggest treating early on for best results.

The fluridone products are touted as being excellent at duckweed control, but the other problem with them, at least as far as summer use goes, is that they are usually intended to treat the entire pond.  And you probably know that whenever you do that, whether it be for a duckweed or an algae problem, there’s an issue with killing too much of the plant life off at one time.

Do this wrong and you end up with a lot of dead fish due to oxygen deprivation.  Robust pond aeration should help as a protective measure but there have been cases where even that hasn’t stopped fish loss entirely.

In addition, it makes no sense to me to get into let’s say, July or August, and then decide to do something about this issue. Duckweed will generally go away completely when fall temperatures start to cool the water down anyway, so why waste your money on a short term “solution” when Mother Nature will do the job for you if you’re patient about it.

So here’s the deal on duckweed.  If you can get ahead of it and treat it in the spring as it’s just showing up, and often with a topical treatment.  Reward is a herbicide that’s good for spot treating smaller areas of duckweed.  By treating it before it blooms out you can limit the use of any chemical intervention in your pond.

If you do decide to go with a fluridone application, they are usually in phases several weeks apart.  But if done early, it can provide an effective control, usually throughout the season.

Maybe better yet, you might consider some non-chemical options.  These can include Grass Carp, Talapia, biological nutrient reduction, and even manual removal.  Keep in mind not every one of these options will apply to every single pond situation, nor will they always be 100% effective, but to suggest that chemical options are all you’ve got in the tool box just wouldn’t be true.

For a bit more information on this wonderful plant called Duckweed, visit one of my favorite pond related sites called Aqua Plant.