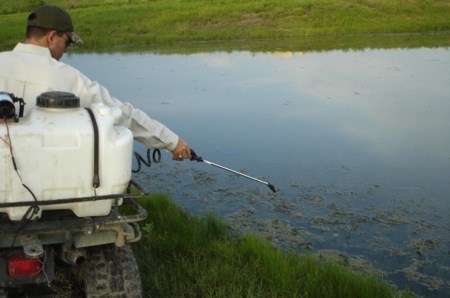 Pond algae is just one of those things that most people want to get rid of.  If you’ve had it show up you probably know what I mean.  First there’s the shock of a once pretty pond turning into a green and slimy mess.  Maybe it will even smell bad which leads to even more frustration.

So really, who could blame you for wanting to learn how to kill algae that you find in a large pond?

But as I always do, I want to pass along a warning of sorts that sometimes killing things isn’t always the best option and it’s no different when it comes to pond algae.

You see, algae blooms are a symptom.  Initially they appear to BE the problem but that’s not really true.  If it were, algae would be growing abundantly in every pond you see but that doesn’t happen.

But when conditions are right, and when nutrients are abundant, then algae will prosper and grow very well.

Mother Nature also uses this growth as a cleaner of sorts.  Any plant, like algae or duckweed for instance, is actually helping to keep the pond in a bit of balance where nutrients are concerned.  If the elements that make up the nitrogen cycle aren’t processed, then issues like ammonia can build up and all kinds of bad things can happen.

If muck and other organics keep piling up at the bottom of a pond, in time, you end up with a stinking mess of things too and that’s not good.  So in a weird way you could say that algae is a first line of defense for a pond that’s starting to go awry.

If you look at algae problems in this way, then it becomes more obvious that one key to curbing it’s growth might be to clean up the pond first.  Try reducing the nutrients that feed the stuff, or start trying to degrade any muck or organic sludge and amazingly you might just find that algae isn’t growing so well anymore.

Most of you who have been long-time readers of this blog know that this is our preferred method of pond cleaning and restoration.  There’s very little risk to the inhabitants of the pond when working this way and it is entirely eco-friendly.

If there were a drawback, it might be that it’s a slower process.  It takes time for the main tool, which is beneficial pond bacteria and microbes to do the job of clean up.  And it takes some good dissolved oxygen levels to work well too.  All in all though it’s a sensible route to follow in the beginning.

Below you’ll find a short video that covers the best way to control algae (without chemicals) in a pond. Or if you’d prefer to watch it on youtube you can learn more about natural algae control there as well.

But How Do You Kill Algae In A Pond?

OK, so I know realistically that not everyone will have the patience or interesting in following what I’ve described above.  So let’s get down to the nitty gritty and talking about killing algae directly.

As long as you know the possible pitfalls of doing this I’m find in moving that way in the discussion.  And if you happened to forget, here’s a quick rundown.

Now before we get into the algaecides and what they do, let me briefly mention ultrasound as a possible option to kill algae outright.  We’ve talked often enough about this technology and in basic terms it uses sound waves to vibrate the algae cells so much that they become damaged and die.  And although it sounds really sci-fi and a little hard to believe, it really does work.

But not on everything.  Not on every type of algae and certainly not on other plants like duckweed or pondweed.  But when it works, it’s pretty amazing to see.  It works best on bigger water (maybe a 1/4 acre and up to multi acre ponds and lakes).  It can cost a bit up front but when it’s effective it will dramatically lower the overall cost of keeping a big pond clean.

We get around the big question of whether it will work or not with a trial, rental type program which has been very well received and it’s virtually taken all  the risk away from a pond owner who wanted to try ultrasound technology in the hopes that it would work.

So What About Algaecides?

There are a couple of common algaecides you’ll find on the market today and by the term “algaecide” that means it’s designed and EPA registered as an algae killing substance.  They may kill on contact or via absorption, but no matter how they do it, the end result will be dead algae.

The most popular algaecides that you’ll see around include the following formulations.  Keep in mind that brand names may vary but these will list some of the more common one’s.

In our professional work and consultations, a pond aglaecide isn’t something we would use in every pond or body of water. In some cases they might be a terrible choice for resolving an algae issue, but in other cases, they might turn out to be the final key to really clearing up an algae plagued pond for good.

Post any questions you might have on using pond algaecides in the comments below and we’ll share the answers with other readers who may be needing some help with their pond.