Green water in a pond is one stubborn critter sometimes.

It’s not really unusual to have this type of pond algae crop up and bloom once the days get a little warmer and sun shines a bit brighter in the spring or summer.  And unfortunately for the small pond owner who’s plagued by it, their first reaction is often to drain all the water out of the pond, clean things up and then start over.  But that’s not usually a good idea because the green water usually comes back very quickly.

Green water is caused by many individual single cell algae of various species.  They tend be very quick to bloom and multiply and they respond very favorably to sun exposure.  The rays of light really ramp them up.

So I guess the next question is, are there better options than draining the pond and starting over?  You bet there is, and we’ll cover a few good ways to deal with this type of algae right here.

As the years go by, more and more pond owners are hearing about the use of ultrasonic algae control devices and how they might help one’s pond look better.  More retailers are certainly offering the systems now and with that, there’s been an increase in mis-information and one might say the promise that ultrasound is the perfect and complete solution for algae reduction.

In this article I want to address the real facts surrounding this technology and tell you what it’s good for, and at the same time I think it’s important to expose it’s limitations, and finally how you can be sure that the device will actually do what you want it to do regarding algae control.

Let’s talk for a minute about pond algaecides. You know, the stuff that kills algae outright and all that good stuff. Hopefully your jaw isn’t hitting the floor, because yes, while I don’t like them, nor do I care to use them, algaecides may be needed now and then and because of that, I thought … Read more

In my continuing effort to share some common questions that we get here at Pond Algae Control Central I wanted to address a few surrounding Green Clean algaecide.

Way back in 2004 or 2005 I became aware of, what at that time, was a revolutionary non-copper based algaecide that could be used to topically treat algae blooms.  Since that time, a number of other granulated peroxide based treatments have come along, and most are quite similar in their formulation.  Some are registered with the EPA as an algaecide and some manufacturers haven’t taken that step but for the most part, other than the concentration of peroxide, they are all similar in how they work. 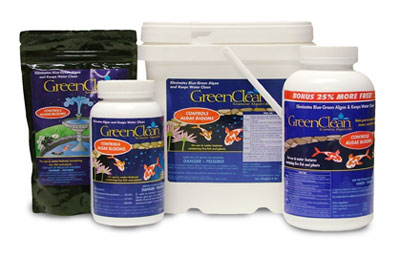 Compared to how common algae blooms are across the country in the summer months, you don’t hear about the potential hazards of algae all that much. But a recent article in Beef Magazine caught my eye because it involved the death of four cows that were killed from contact or most likely ingestion with a toxic form of algae.

Before we delve into this topic I want to stress that this is not something to panic over or get crazy worried about. Toxic algae is nothing new. It’s been a part of our world since, well the beginning or pretty close to it. The vast majority of algae will never develop toxicity or cause this kind of problem however it’s important to note that the risk exists and what you can do about the algae if it shows up.

In the article you’ll see that a few specific things were talked about. Blue green algae and cyanobacteria were mentioned and specifically a species called microsystis was highlighted. What’s interesting to note is that in many of our algae tests and samplings sent to us from around the country, microsystis is probably the most common algae that’s found in nearly every pond or lake. So obviously it doesn’t always produce toxins, and researchers still don’t know why it starts to in particular cases. Ultimately the only sure fire way to deduce that toxicity is present is to test for it after it’s created.

It’s likely, that in most cases, it’s also a matter of density. When populations of this blue green algae are high and abundant, the chances of toxin production are likely to increase. What you’ll see in the water may vary from a green or brown tint turning into a much thicker, paint like appearance to floating slicks or masses. Colors may also vary from green and brown to red and blue.

For some reason, there are times when a pond has green water and anything you try to clear it simply doesn’t seem to work.

Such was the case with a frustrated small pond owner who corresponded with me over the last few months. Marge is a pond friend who’s kept in close touch as she tried numerous remedies. Products like Algae Fix would work, but only for a few days and then the green water would come back. Add in the mix, barley straw concentrate, bacteria,and more.

Finally we discussed a few “back to basic” things that might help including shading, from plants or physical structure, checking on her pond’s fish load (of which she found she had too many) and feeding routines. But the real clincher was something so simple that most people overlook it.

What could this possibly be you may ask? Water changes. That’s it…just some simple water changes.

Ideally, the only thing Marge could have done differently is to start with partial water changes, reduction of fish, adding some desired plants, or creating some form of shade, rather than hitting it with chemicals right off the bat. But by the same token, we all learn, and evolve our understanding of things via one step at a time. The main thing was that she didn’t give up and wallow in defeat. She kept trying and kept experimenting with things until she found what worked for her pond.

So what’s with the water change thing working here?