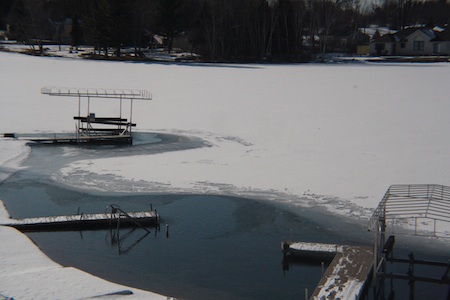 It’s likely that no one needs to be reminded of last winter. It was long, very cold, and very snowy in many parts of the upper U.S.. Based at least on recent memory, I can’t recall one that was as cold, for so long, in the upper Midwest.

As I reported in the spring, many ponds were frozen over for so long that when things thawed out, there was some pretty significant fish loss. Here’s an article and video that covered that at the time.

Now what’s kind of interesting is that many of the weather pros didn’t really indicate just how cold things might get. It wasn’t forcast to be all that bad, except one source actually came pretty close. The Old Farmer’s Almanac darned near hit the nail on the head with their prediction.

So as we head into the fall of 2014, there’s a looming question. Just how cold is this winter going to be?

I don’t know that anyone can say for sure, but in the interest of preparation and the forewarned is forearmed kind of thing, I wanted to share a recent update from the Almanac.

Once again, they are calling for a pretty cold and snowy winter for much of the country. In their words, it will be “more shivery and shovelry”. I don’t like the sound of that!

The key for winter pond care, or more specifically is finding a way to keep the ice partly open. Aerators or pond circulators work great for this. For those that had something like this running last winter, their fish did pretty well overall. For the ponds that didn’t, it was pretty much a crap shoot and in some ponds, thousands of fish (and many large ones) were lost.