We’ve talked about the Aquascape IonGen device before on this blog so I won’t go into great depth about how this system works and all that here.  If you want to learn more about when to use a copper ion generator (and when not to) then please read this detailed evaluation here.

In this short tip I wanted to address a question that came up from a pond owner this week.  He was more worried about using beneficial bacteria, along with an algaecide, and if there were any problems with this.

Based on the initial details, it didn’t sound like there was much of a problem.  He, like many folks, wanted to use bacteria with something like Algae Fix, or Algae Off.  Both of these algaecide formulas can be used with good microbes and there are no complications with that.  The algaecides will usually knock down or kill of various types of algae, while the microbes clean things up over time.

But then he mentioned something called the IonGen. 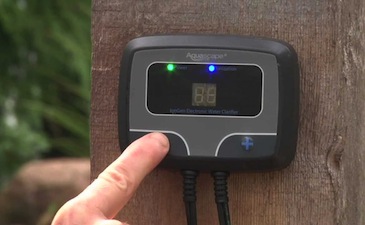 The Aquascape IonGen is a device that is designed to limit or control algae growth by releasing copper ions into the pond water.  It’s a great little tool that can really hinder algae growth, but it has to be used with some discretion because it does involve the use of copper, which is toxic to algae.

Unfortunately this same substance will also kill off a lot of good bacteria in the process.

So in this pond owner’s case, the story changed pretty quickly.  He was using the IonGen and dumping a lot of bacteria into the pond.  Initially the good bacteria helped with a lot of issues, but those benefits seemed to fade as time went along.  And no doubt the IonGen had a part to play in this.

So his recourse is to decide on which way he wants to go.  He can use the IonGen and limit algae growth, but he many have to clean other organics out of the pond that the device won’t take care of.  Leaf debris, etc would be unaffected, but should ideally be removed as much as possible.  So a pond vac might be of use here.

He could try to build up and sustain a good colony of beneficial bacteria and try to balance things out this way.  He’d have to turn off the IonGen and probably work with another type of safer algaecide, desirable plants, barley, dyes, or anything that wouldn’t harm the good microbes.

Or finally, he could, in a limited way, blend the two.  As we sometimes suggest with UV (which is also detrimental to bacteria) you would hold the IonGen in reserve, and only use it in times of bad algae outbreaks.  If necessary turn it on and clear things up.  You will obviously knock down some good bacteria in doing this, but you could also work to build this up again afterwards and try to retain balance and clarity as long as possible going forward.  I wouldn’t say this is the perfect solution but it might work for some folks.

In the end, it’s just good to know what products will, and won’t, work well together.  You can save yourself a lot of wasted time and money with this simple tip.