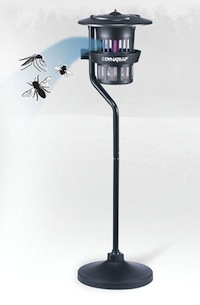 Early this summer we had some decent rains in Iowa, and usually with that, you’ll see a pretty good crop of gnats and mosquitoes come along.

And they did just that.

You couldn’t go out in our backyard in the evening and not get bit by something or many things actually and so this seemed like a good opportunity to do a little testing (and scratching).

For a few years now we’ve had the Dynatrap flying insect trap hanging in our shop. We leave the doors open often enough in there that we get some visiting bugs and the Dynatrap has done a good job of catching a lot of them. I was so impressed with it that I posted a bit of a review here last season.

As I noted there, the Dynatrap doesn’t zap the bugs. It uses a light that releases CO2 into the air that attracts the critters and as they get close to the light, a fan will suck them into a capture chamber below and trap them there. It’s economical to operate, and it’s safe and clean to have around.

But how well does it work outside?

I decided to set it up and give it a go on our back deck. You know, the place we couldn’t stand to be because of all the bugs. The photo that you’ll see below is from 3 days of operation, 24 hours per day. The capture chamber filled up so fast that I had to empty it on the third day. For the first few weeks, we would go through this routine of cleaning it out every few days, but after the third or fourth week, things settled down to where you don’t have to do it as often. In fact it’s been a few weeks since the last cleaning.

More importantly we’ve been able to spend quite a bit more time on the back deck and in the backyard without much harassment. Particularly in the area where the trap is placed, it’s pretty rare that you’ll even see many insects, and this is as it should be.