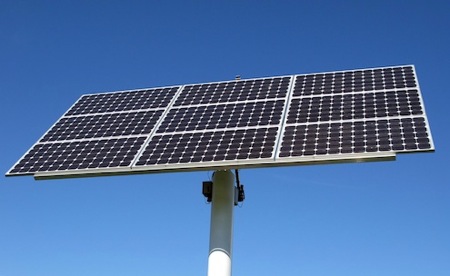 Can I use solar power to run my pond aerator?

It’s a question that’s coming up more and more often.  And I have to admit that I’d be asking the same question myself if I were in your shoes.  Solar just makes a lot of sense when it comes to running something like pond aeration, at least on paper.

There are small pond fountains, in particular, that are running off solar, but what we’re talking about here is the concept of powering a large pond aeration system.

I’m not intimately familiar with all things solar and I wouldn’t consider myself and expert on the technology at all but I do have a few tips to share with you on the subject here.

I’m very pro-solar and admire the people who end up powering part or all of their home appliances with help from the sun.  It’s a grand, eco-friendly idea and I hope that legislators and the powers that be will make this way of producing energy more affordable and accessible for everyone.

In terms of running a pond aerator with solar power, it’s certainly possible to do it.  But there are some challenges to it and I wanted to address those below.

Let me preface the following comments by noting that I’ve been looking into solar powered pond aeration for quite a few years now.  I think the idea makes a great deal of sense, particularly for very remote ponds where electrical access is limited.

In those cases of distant and remote ponds, windmills have been the most common form of aerator used, and I certainly think they are better than nothing at all.  It’s just that you have to realize that wind power is not always constant.  On hot, still days with nary a breeze, you might run into some issues with low oxygen in a pond.

Modern windmills do provide more air output than they used to.  On a good day with a 5 to 10 mph wind, you might see from 2 to 3 cfms which is just fine.  Most windmills won’t produce enough air to spread round to a number of diffusers, and with the inherent inconsistency, I’ll usually opt for an electrical powered aerator whenever I can.

One workaround that we’ve used is to trench in some lightweight airline and this allows us to put the air pump near the electrical outlet, and then connect this buried airline to weighted airline at the pond’s edge.  From there this heavier airline sinks and runs down to the diffuser at the bottom of the pond.

We’ve run installs from 3,000 feet away, and even longer using some models of aerators, so there is some versatility with this method.

But a lot of pond owners continue to consider and ask about solar power.

And here’s where we run into a few minor problems.

The first thing that’s necessary to understand is that solar panels and their battery backups use direct current (DC) while the standard compressors used in aeration systems use AC power.  This allows them to be directly plugged into a 110v outlet, or optionally they can be set up to run on 220 volts as well.

But the power from a solar package will have to be converted over from DC to AC power for this to work and so you’d need an inverter in the mix too.  No big deal really but it’s an important point to remember.

By far the biggest drawback to solar, right now anyway, is the cost of the equipment to set this up.  We recently contacted a solar equipment supplier and asked them about the current prices on a package that would run any of our large pond aerators, from the 1/4 HP up to the 3/4 HP pumps.  These systems draw from around 1.8 to 5.7 amps respectively.  The compressors are designed to run and should be operated continuously and that would be our goal with any kind of power supply.

Three options were presented to us and all of them included anywhere from 12 to 15 panels, and all the components to run the aerator.  And the prices were staggering.  The least expensive option was around $6,500 with the highest running over $9,000.

So as you can see, the solar part of this whole package will run anywhere from 3 to 6 times the cost of the actual aerator itself!

As unfortunate as this cost analysis is, I think there is hope for the future.  Eventually solar components will become more affordable.  Most likely the first opportunity people will have to combine the two technologies of solar and aeration will be in a DIY setting.  Solar components are available now for direct purchase, and people are using them on their homes to power a variety of things.  The chances are good you’ll save some money by doing this type of set up yourself and with some proper instructions the project shouldn’t be too hard to do.

As time goes on, we’ll continue to keep an eye out for resources where we can point people to that may be of help in your quest to power a large pond aerator with solar energy.  For the time being, we’ll continue to suggest the much more affordable option of overland airline or windmills simply due to the current cost restrictions of solar power.

Do you have any experience with solar power?  Are you running a pond aerator on solar now?  If so, or if you have any comments or questions, please share those below.