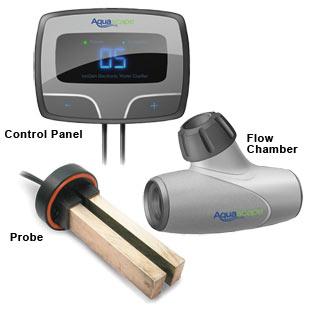 There was a time when about the only way you were going to stop algae from taking over a pond is to add more of the plants that you actually liked in order to try to choke the unwanted stuff out.  This isn’t such a bad way to go of course, after all it’s worked ever since people started to try and manage a pond.

As the years passed, as often happens with an adventurous and industrious group of deep thinkers, someone tossed some barley in a pond and that helped some too.  Maybe mix in a bit of lavender and you’ve got yourself some algae control.

Today however, technology will have a part to play, not only in our lives (think iPad) but also in our ponds.  And one of the newer pond algae control devices is called the IonGen.  In this article I’ll attempt to explain what it does, how it works, and why it’s useful in a battle against algae.  Oh, and I’ll through in a few tips on how to use it safely too.

We’ve known for quite a few years now that one thing algae doesn’t like is copper.  In most of the conventional algaecides used in large ponds you’ll find copper (in some form) as a primary ingredient.  Since copper is toxic to algae it will work on virtually all of the species we might encounter in ponds.

I’ve written in the past about why I don’t really like to use copper in most ponds.  It can clear the water and reduce algae often enough, but it comes at a cost.  Copper will also knock down good bacteria and I’ll always try to avoid that if I can because we need those good little microbes to help keep the pond clean, particularly at the bottom where organic stuff can build up and create a lot of sludge and muck.

However, there are times when many other things have been tried and yet algae seems to persist, and when you reach that point, a copper based product may become something to consider.

The IonGen is useful in any pond up to 25,000 gallons and size, and I will often suggest that it be used in water features and ponds, and particularly in those with no fish.  I’ll talk more about by opinion on this in a moment.

In simple terms, the IonGen is made up of a powered control panel, a flow chamber, and a copper probe.  The flow chamber is connected in-line, usually between a skimmer box, or pump and a filter.  A low-voltage electrical current is sent to the probe, and this charge, in essence, makes copper ions attempt to jump or cross from one prong of the probe to the other.  When this happens with the water flowing through it, these copper ions get released into the water.

What’s great about the IonGen is that you can control how many copper ions are released by using the control panel.  A detailed instructional sheet comes with the device, and in that you’ll find details on setting the unit to get the pond cleared of algae, then after it’s reduced you can adjust the copper output (usually lower) for maintenance.

Over time, the copper probe will wear down and need to be replaced.  It’s easy to do, as you just unscrew the old probe and put a fresh one in.  This degradation rate will vary depending on your water chemistry but in most cases you should get at least a year to three years out of a single probe.

One of the things that inspired me to write about this device is that I get a good number of emails asking about an easy, time saving way to work against algae in a pond.  Some people don’t have the time or patience to get things cleared up and they just want some results and so I think the IonGen can fit that bill for some people very well.

When they first came out, I had some reservations about ionizers because I am always worried when people take short cuts or don’t fully check something out before using it.  Copper has it’s benefits, as I noted above, but there are risks to using it too.  And frankly speaking, that goes for any type of quick kill additive, whether it has copper in it or not.

If something is labeled as an algaecide, it basically means it’s designed and tested to kill algae outright through contact or absorption.  There’s nothing wrong with that necessarily but the problem comes up when you try to kill off a lot of algae at once in a small pond.  If it’s heavy, widespread, and abundant, and you kill it off rapidly it most surely will pull a lot of oxygen from the water as it dies.  Low oxygen will often harm fish, sometimes in great numbers, and so you really want to avoid that if possible.

To safeguard your fish in this die off you can do a couple of things.  First it’s always good to have a pond aerator running full time during this process.  In a small pond you can also manually remove any string algae by hand or removal tool.  If it’s green water, you’ve got a bit more of a challenge because you can’t lessen the algae load physically.  So aeration would be a key here, and if you were using the IonGen for instance, I would start with a low copper level and very gradually increase this over time to try and clear the algae very gradually if possible.  Don’t rush the process.

In ponds with no fish at all, or ornamental water features, you can certainly raise the copper output more quickly and bring clarity to the pond much faster.

One of the keys to using copper in ponds for algae reduction is to know what your water parameters are.  What I mean by this is it’s good to test the pH, alkalinity, and water hardness before using it.  This will insure that you get the best results with it over time.

Ideally pH should be relatively stable and be somewhere between 7.0 and 7.8 or so.

Alkalinity readings should be somewhere between 80 to 120 mg/L or ppm’s. Alkalinity levels dramatically affect the copper retention in pond water. A high pH and hardness will increase the precipitation or, in another words, the evaporation of copper in the pond. It either won’t last long enough to do much good or it will disappear so quickly that the copper anode will degrade prematurely.

On the other end of the spectrum, low alkalinity increases the duration of copper and this can be problematic when it’s constantly being added to the water, even in small amounts. In readings where the alkalinity is below 50 mg/L copper can build up to toxic levels over time and may cause harm to fish. In most cases a copper level reading of 0.2 to 0.25 should be safe for fish and be able to control algae.

All of these numbers can be derived using some simple 5 and 1 test strips.  And speaking of testing, along with the IonGen device you’ll find copper level testing strips in the box as well.  By testing the water ahead of time, and keeping an eye on things as you use the ionizer you should be able to manage the entire process safely.

In the end, I would not go so far as to say that copper ionization is my first line of defense against algae or my favorite tool in the kit.  But I recognize that there may be situations where it will fit the need very well, and as long as some consideration is given to a pond’s status before hand, and some follow up monitoring in regards to safety for fish is applied, then the IonGen can serve as a useful tool for pond algae control.

Visit the following link to learn even more about the IonGen G4 Pond Ionizer.

4 thoughts on “IonGen Pond Ionizer – What Does It Do?”