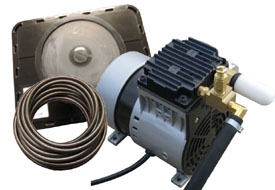 Can I be honest. I’m not a fan of running in the first place.

Yes, it’s true that if something bigger and meaner than me is in pursuit, I’ll run fairly quick, but that’s about it.

Needless to say I’m not into marathons either. For those of you that are, I applaud your efforts because anyone can certainly understand that running 26 miles, all in one attempt, takes true endurance and stamina, oh and a bit of determination too.

Now just for the sake of discussion, how do you think you would perform with a plastic bag over your head?

If it’s sealed reasonably well at the bottom, and has no leaks (or as I call them, cheater holes) my best bet is you won’t get very far at all. Try as you might, you’ll probably drop in the first 1/4 mile and if you don’t, you’ll certainly be struggling along as if you were dragging an elephant by the tail. Suffice it to say, you won’t finish. But YOU might be finished when all is said and done.

You’re probably wondering how this wonderful story came about and what it possibly has to do with your pond algae problem.

Well, recently I had a great discussion with a large pond owner who had tried beneficial bacteria a few years ago. In the very beginning the stuff worked great. It cleaned things up pretty well for awhile, but then over time, things just slid downhill again. Algae came back, and for the last two years has been a constant presence in the pond.

This was a bit odd for me to hear because normally you see the reverse. If you get a response with a bacteria treatment or two, it’s a good sign that the water chemistry is good and all the supportive things are in place for the good little microbes to thrive.

As time goes on, and with some follow up treatments you normally see the pond get better and better (i.e. cleaner) and you can cut back on adding anything later on. But this fellow’s pond went in the other direction!

None of this made much sense to me until in our discussion he mentioned that he didn’t have any aeration in the pond. To be exact, he had an incoming flow of water which helped to circulate things a little bit, but true aeration was minimal. And although there could be a few other reasons why the bacteria supplements weren’t working well, the main thing that stood out was the potentially low oxygen levels.

What’s important to keep in mind here is that all of the real clean up bacteria that’s used in ponds is aerobic so it needs healthy levels of DO (dissolved oxygen) in the water to really work well. Without it, the bugs are starved for oxygen, much like you and I would be if we tried to run a marathon with a plastic bag over our head. The outcome of this will not be good!

This is why I’ll often tell people, and I would say this is particularly noted to large pond owners, that a good pond aerator is probably the first thing you want to consider when you’re trying to clean up or restore a pond. Any pond, of any size will benefit, as will your fish, but so many important processes can get halted or blocked when good levels of DO are lacking.

I have always been well aware, that for most people, the expense of a pond aeration system is a fair investment. They aren’t dirt cheap, or at least the good reliable one’s aren’t. But they represent one of the most powerful tools that you have as a pond owner to reclaim your pond!

I will not say that beneficial bacteria alone isn’t useful. We’ve had enough good results with it to know that it can work sometimes without an aerator to accompany it. More often than not though, I can say that for those people that used bacteria without an aerator, they often had to use more of it, for a longer period of time, compared to a pond that has aeration in it.

They work better together and at some point, if you do it right, the aerator alone may be enough to keep the pond clean and balanced which means you don’t have to use “additives” as much anymore. This saves money in the long run. So all in all, these two things, aeration and good bacteria, will go hand in hand together.

Much like me and my two-wheeled oxygen tank and respirator that I plan to use on my first marathon:)